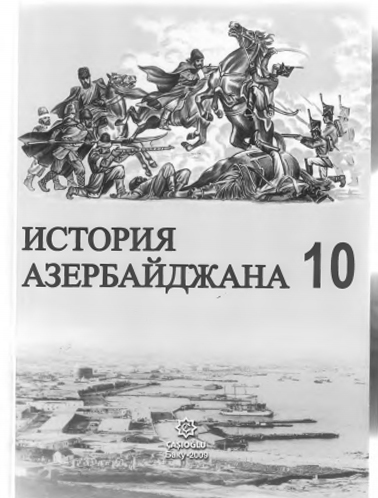 The sly and corrupt Armenians lied to them signing a treaty in one place and making a massacre in the other. Our eternal enemies, the Armenian nationalists, fortified their positions with Armenian volunteers invited from Iran and Ottoman Empire. Despite this, the Armenian side had bigger losses. The main reason was the courage and heroism of the Azerbaijani youth. The legendary Gachags especially stood out in the battles against the Armenians. In early February 1905, before the national massacre in Baku, the Armenians diligently spread opinion about the Muslims’ bloodthirstiness and savagery. They implemented all the methods and dirty schemes to expulse the Azerbaijanis from their homes. Disappointed with the results of the massacre in Baku and Nakhchivan, the Armenians decided to take revenge against the Muslims settled in the town of Irevan and its neighbouring areas.

The Armenians, however, did not make proper conclusions from what happened. They bribed General Galashapov with 10 thousand manats in June 1906. A squad consisting of Cossacks, Russian soldiers and 10 thousand bandits was created to carry out abominable crimes in Shusha and in the villages nearby.

After the World War I, those intending to spread their influence on the eastern countries used the Armenians, Assyrians and Kurds for their aims making them weapons in their hands. After the Russian troops left Southern Azerbaijan, the English troops seized Zanjan, Miyan, Khoy and Urmia before spring 1918. At the same time, these states incited the Assyrians, Kurds and Armenians to literally perpetrate genocide against Azerbaijanis in the north-west of Southern Azerbaijan. The Russian troops captured the city as a result of sanguinary battles. Javad Khan and his son Huseyngulu agha heroically fell in the unequal fight. The Armenians showed their meanness until the end.

During a speech, A.M. Topchibashev said the Armenians were in a secret collusion with the Russians to prepare a new mass murder of Muslims in Baku, Irevan, Kars and in other regions in the South Caucasus. This thought brought about a strong uneasiness among the delegates of the congress. A delegation headed by A.M. Topchibashev was sent to St. Petersburg on May 9 to inform the Temporal Government about this.

In essence, the escalation of the Armenians’ historical animosity against the Azerbaijanis served an impulse for the development of the national liberation movement in Azerbaijan in order to carry out the irreconcilable struggle against the Armenians who came up in the same block with the Russians. The united efforts of all the layers of the Azerbaijani people were needed.