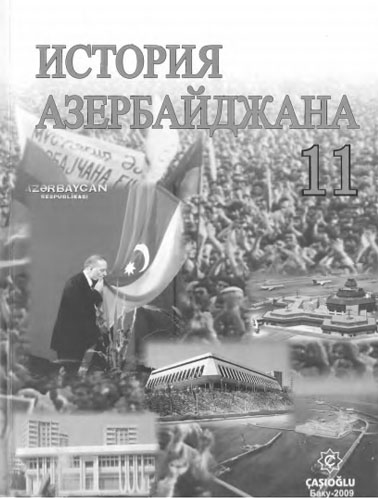 A group of Dashnaks assembled in front of an Armenian church on 30 March was the first to open fire against Muslims. On 31 March early in the morning, columns of Bolshevik Dashnaks attacked Kirpichkhana, Mammadli and other neighbourhoods inhabited by Azerbaijanis. The Armenians convinced the Russian sailors that purportedly the Azerbaijanis were slaughtering Russians in the Icheri Sheher fortress. They started firing those neighbourhoods from the air and from the sea. The sailors sent their representative to the site and stopped the fire after finding out that it was a provocation. Amid unequal forces, the Muslims fell victim to mass violence and stopped the resistance on 31 March. Nevertheless, the Armenian bandits took a reprisal against the Muslim civilians. As a result, the residents of the Azerbaijani neighbourhoods were slaughtered with sabre. The Muslims’ massacre continued late after the midnight of 2 April. They set fire to the publishing house of Kaspiy newspaper, to the office of Achyg Sez newspaper, to Ismailiyya building and damaged the minarets of Teze Pir Mosque with shots from cannons. Over 12 thousand people were killed only in Baku as a result of the March genocide. The Bolshevik-Dashnak formations continued exterminating Azerbaijanis in Guba, Salyan and Lankaran uyezds*. The population of 130 villages in Kurdamir and Lankaran was exposed to bloody slaughter. Under the leadership of S.Lalayants and T.Amirov, the Dashnak groups committed bloody crimes against the civilians in Shamakhi from 3 to 16 April. Over 7,000 Azerbaijani civilians were killed and 72 villages were destroyed with the support of the population of the Armenian and Russian (Molokan) villages. Twelve mosques were ignited, including the 800-year-old Juma Mosque. Under Hamazasp’s command, the Dashnak squads ignited 162 villages and exterminated over 16 thousand Muslims in Guba Uyezd. The population in Zangezur, Shusha, Javanshir and Jabrayil uyezds was also exposed to genocide. The Muslims’ (Azerbaijanis’) genocide continued until the middle of 1918. More than 50 thousand Azerbaijanis were killed over this period. In a letter to Lenin dated 13 April, Shaumian confessed that the Bolsheviks had deliberately organised an ethnic massacre with the Dashnaks’ help.

As a result of the negotiations, which took place in Batum between the representatives of Azerbaijan and Armenia, an agreement was reached that Azerbaijan ceded the city of Irevan on the condition that the Armenians would give up their claims to the mountainous part of Karabakh. The Armenian State, however, did not abandon its claims on Zangezur, Nakhchivan and the mountainous part of Karabakh. Andronik, a malicious enemy of mountainous peoples, invaded Zangezur in summer 1918. Andronik’s bandit groupings started ruining and burning Azerbaijani villages and brutally murdering their population.

Living with the dream about Great Armenia, the Armenian nationalists did not withdraw their claims on the Azerbaijani lands at Paris Peace Conference, either. The territorial claims they laid at the peace conference included genuinely Azerbaijani lands Zangezur, the mountainous part of Karabakh and the Nakhchivan zone.

The Bolsheviks started to destroy everything old; they exterminated the intellectuals, the clergy and the leaders of Azerbaijan national army, whom they considered their enemies. Many were shot on the Nargin Island. Everything was carried out in secret from Azerbaijan Revolutionary Committee by the Central Committee of the Azerbaijan Communist Party (Bolsheviks), BC and the special detachment of the 11th Red Army, the core of which consisted of Russians and Armenians.

The first powerful armed uprising against the Soviet regime took place on 25 and 26 May 1920 in Ganja. The rebels bravely fought in unequal conditions. The Armenian population of Ganja rendered help to the Red Army, which came as a stab in the back.

After Armenia became a Soviet Republic on 29 November 1920, its claims on the genuinely Azerbaijani territories grew even stronger. The appetites of the Armenians who intended to seize as much territory as possible from Azerbaijan grew after a statement N.Narimanov made on 1 December 1920 based on a 30 November 1920 decision of the Political and Organisational Bureau of the Central Committee of the Azerbaijan Communist Party (Bolshevik). ‘…No border exists between Soviet Azerbaijan and Soviet Armenia…,’ the statement said. The Armenians skilfully used the sovietisation for those aims.

This is how Azerbaijan could retain ancient Nakhchivan -- a territory that had always belonged absolutely to Azerbaijani (Turkic) people -- with an autonomous republic’s status despite Armenia’s claims and its patron Soviet Russia’s mediation.

Sumbatov-Topuridze, Grigoryan, Malyan and other Armenians holding senior positions in the Internal Affairs structures played a crucial role in organising the mass repressions, being genetic enemies of the Turkic people. In the years when the repressions reached their culmination, Armenians were heading the regional departments of the People's Commissariat for Internal Affairs in 31 of 51 districts of Azerbaijan.

The tensest point in the conflict was in the Nagorno Karabakh region of Azerbaijan. The Armenians, who had moved here after the Treaty of Turkmenchay, from time to time came up with a demand of separating that territory from Azerbaijan and transferring it to Armenia. Dreaming to create the state of ‘Great Armenia,’ the Armenians used all the methods to achieve this mythical idea. Back in the mid-40s, the underground ‘Karabakh Committee’ was created on the initiative of A.Mikoyan, the head of the Armenian lobby in Moscow.

Deportation was carried out in 22 districts densely populated by Azerbaijanis or in districts in Armenia where Azerbaijanis lived in co-residence with Armenians. The Armenian nationalists first of all resettled the population living on the most fertile lands. The number of the Azerbaijanis in the Armenian SSR significantly reduced as a result of the sinister policy of Stalin, Beria and Mikoyan and indecisiveness of the leadership of the Azerbaijani SSR. In Azerbaijan, on the contrary, the number of the Armenians grew. Thousands of Armenians were transferred to the newly created industrial centres, including Sumqayit, Ali Bayramli, Mingachevir and Dashkesan. The positions of the Armenian lobby became stronger in Upper Karabakh, Ganja and Baku. The spiritual terrorism unfolded against the Azerbaijanis living mostly in Western Azerbaijan expanded; they were driven away from the places of their permanent residence. All the Azerbaijanis had been expelled from the territory of Armenia by the late 1980s, that is, 40 years later.

Yet another anti-Azerbaijani movement began in Armenia in mid-60s. The 50th anniversary of the so-called ‘Armenian genocide’ was marked in 1965. This gave a new impulse to the oppressions against the Azerbaijanis. Despite this, the anti-Azerbaijani movement expanded in Armenia in this period. ‘Karabakh Committee’ started to act openly. The Armenian lobby’s positions got stronger in Azerbaijan with Moscow’s help and due to the connivance of the leadership of Azerbaijan. Nationalism deepened in Karabakh with the Armenians openly forcing the Azerbaijanis out of Upper Karabakh. A reprisal was taken against Azerbaijanis in the city of Khankendi in 1967 as a result of which several people were killed.

A railway was constructed from Aghdam to Khankendi in 1979. A new region called Askeran was established in the area. The Armenians, however, did not give up their evil intentions. The attempt to raise the Nagorno Karabakh issue again was resolutely suppressed in 1977. In the 1970s, the Armenians incited the centre to raise the issue of resettling the local residents and dividing the territory of the region between the republics as highland pasture on the pretext that Kalbajar district lacked prospects of development. Heydar Aliyev enlivened the economy of the area in a short period thus blocking the Armenian nationalists’ attempts. The Mughan road was constructed to Kalbajar.

A propaganda campaign against Azerbaijan started in the USSR and Western print media as a result of the efforts of forces favouring the Armenians. Receiving support from inside the country and from a few other countries, the Armenians started to openly lay territorial claims. In this period, the ruling circles of Azerbaijan not only turned a blind eye on some terrorist acts the Armenian nationalists carried out but also concealed them for the sake of hypocritical international principles.

Secret armed formations were created in Armenia with the governmental support, and the Azerbaijanis were forcibly expelled from their native places of residence. The first groups of refugees from Kafan and Meghri districts found shelter in Azerbaijan in January 1988. On 19 February of the same year, rallies with nationalistic slogans – ‘Clean Armenia from Turks,’ ‘Armenia to the Armenians,’ and the like – were held in Irevan. Inspired by these undertakings, the Armenians of Nagorno Karabakh started to hold rallies and demonstrations in Stepanakert (Khankendi). On 24 February, the Armenians living in Askeran District opened fire at a row of Azerbaijanis killing two people and injuring 19. In order to finally drive the Azerbaijanis out of Armenia and to create a negative image of the Azerbaijanis in the eyes of the publics a favourable occasion was needed, and the Sumqayit provocation became that occasion. Grigoryan, an Armenian nicknamed ‘pasha’ who pretended to be Azerbaijani, was the first to commit a crime on 28 February. He alone killed five Armenians. As a result of the tragedy, 32 people were killed (including six Azerbaijanis), 200 flats were looted and dozens of public buildings, buses and personal cars were burnt up. The Armenians achieved what they wanted. The bloody anti-Turkic movement expanded even more after the Sumqayit occurrences.

The Armenian fascists tied 14 people to the trees in Gugark District, poured petrol over them and burnt them alive. Seventy Azerbaijani children from Leninakan orphanage, aged up to 14, were driven alive in a huge tube in Spitak and its edges were then hermetically welded.

As a result of Khojaly Genocide, 613 people were killed, 487 people were injured, 1275 people were taken hostage, 8 families were utterly exterminated and the town was burnt down. Corpses were exposed to bigotry during the genocide. This tragedy was one of the most horrible crimes committed against humanity in the 20th century.

The Armenian fascists shot on the spot the old people and children who were not capable of work. In Kalbajar, 144 localities were captured. Over 500 entities, 13 thousand houses, 600 thousand head of cattle, 5000 horses and so on were looted.

From a speech Ilham Aliyev delivered as the head of the Parliamentary Delegation from Azerbaijan at a Parliamentary Assembly of the Council of Europe September 2001 session, ‘…Azerbaijan has more than once suffered from terrorism. The Armenians have carried out 32 terrorist acts since the beginning of the Armenian aggression. As a result of these terrorist acts, 2,000 people were killed in Azerbaijan and tens of thousands were injured…’